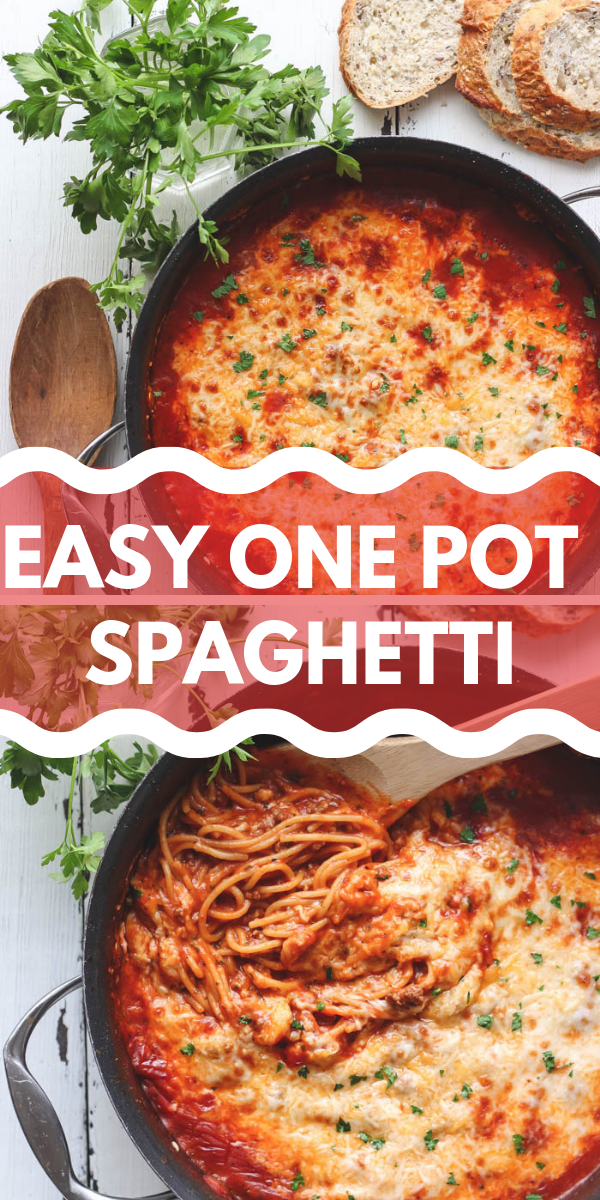 I like to use a big, deep-sided skillet for this recipe, but whatever you use make sure it can go in the oven too! The ground beef goes in first and cooks until it is nice and browned. Then some spaghetti sauce and beef broth join the party. I’m going to be 100% honest and admit that 9 times out of 10, I just buy a jar of sauce from the store. I know, I know… bad food blogger! I do love, love, love my recipe for homemade, but I just can’t find time to be all Martha Stewart these days, so store-bought it is. 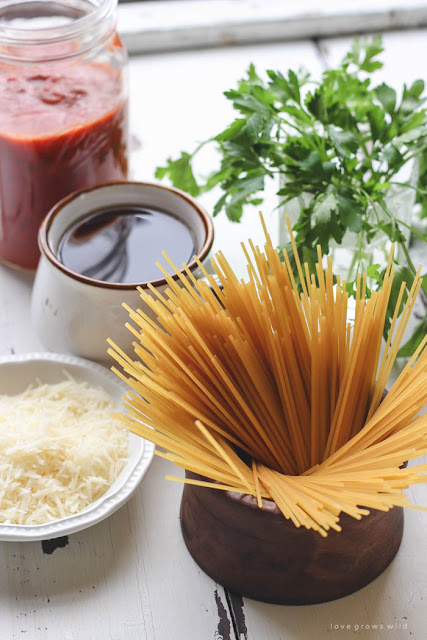 The reason I add the beef broth is because the noodles are going to need a little bit of extra liquid to cook in. I break the dry spaghetti noodles in half so they fit in the pan better and stir until they are completed submerged in the sauce. By boiling the noodles right in the sauce, the mixture becomes super creamy and delicious, and the noodles have so much more flavor than regular water-boiled noodles. Then plenty of cheese gets sprinkled on top and the whole skillet goes under the broiler for a few minutes until the cheese is all melted and golden 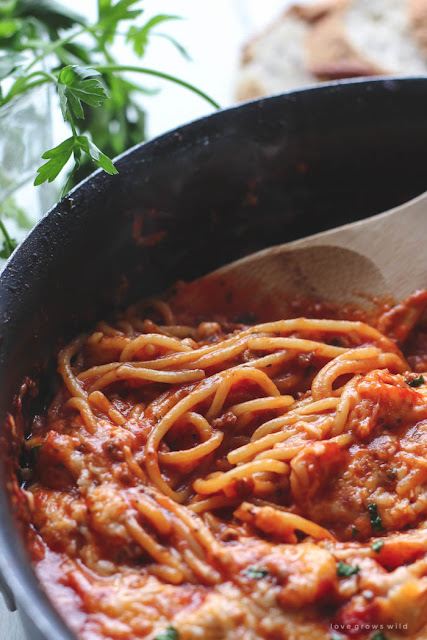 The easiest, most delicious spaghetti you've ever made! Creamy, cheesy, full of flavor, and only one dirty dish to clean!
Author: Liz Fourez
Recipe type: Main
Serves: 4

Ingredients
· 1 pound ground beef
· 8 ounces thin spaghetti noodles, uncooked
· 3 cups spaghetti sauce (homemade or store-bought)
· 2½ cups beef broth
· ½ cup mozzarella, shredded
· ½ cup parmesan, shredded
· fresh parsley, chopped
Instructions
1. Preheat broiler on high. Heat a large, deep-sided, oven-safe skillet over medium heat. Add the ground beef, season with salt and pepper, and cook, stirring occasionally, until browned. Drain fat and return beef to skillet.
2. Pour spaghetti sauce and beef broth into the skillet and stir to combine. Break the uncooked spaghetti noodles in half and add to the skillet. Stir noodles into the sauce and make sure they are fully submerged in the liquid. Bring the sauce to a boil and cook for 9-11 minutes, stirring occasionally, until the noodles are tender. Sprinkle on the mozzarella and parmesan and place under the broiler for 3-5 minutes until the cheese is melted and slightly browned on top. Sprinkle with fresh chopped parsley for garnish.